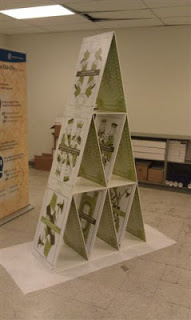 Who knew a house of cards could be the centerpiece of a trade show display? I give an official tip of the cap to the fine folks at Spoke Marketing Branding Interactive for just that. They invited me over a few weeks ago to talk about how they wanted to help a friend going to their first trade show and wanted something striking, yet economical that could be produced in less than 8 working days. As I listened to what they were requesting, I had that sinking feeling I was in over my head. They started describing a lot of ideas that were great visions but challenging to produce quickly or cheaply.

Many years ago I attended a presentation by Gill Wagner who was leading a new venture called Honest Selling. The spirit of his presentation has never left me. Gill spoke passionately that sales advisors need to be brutally honest at all times and at all costs…no exceptions. His conviction and passion for this approach resonated with me in such a way 15 years later I still proudly try to make that part of my DNA. Why is that relevant here? 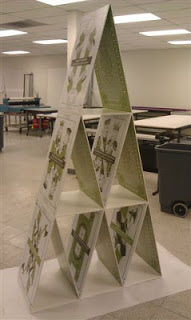 So I am listening to the Spoke creative team firing out ideas left and right. You could feel the energy and passion they had for wanting to create something great for their client, Panoptic Wealth Advocates. The problem was I had no confidence I could create what they wanted in the time frame, budget or end result being described. These are the moments I call “moments of truth” and how we respond in those moments defines who we are.

It was terribly uncomfortable but I explained to them my worries, concerns and limitations expecting them to say okay then.. be on your way. But that is not what happened at all. Surprisingly, they had more confidence and conviction in what we could do than I even had in myself. I am kind of embarrassed about that but in the belief of if you have a thought or concern when dealing with a client or situation, the ones you hold back will almost always be the ones you wish you did not. This situation proved to be priceless. After more conversation, more drawing of pictures and a new vision, I was on my way with a skeleton of a plan.

Over the next 24 hours we crafted a plan for producing a self standing 6′ tall deck of cards illustrating the point that you do not want your personal finances to become the proverbial “house of cards” ready to crumble at the first bump in the road. Imagine walking down a trade show aisle and seeing this prop in the middle of a 10′ space. How could you not stop and have a curiosity for what is going on?

The story does not even stop there. Of course this would all occur at a moment in time when we happen to be the busiest we have ever been in the last 6 years. Through it all on Valentines Day / Night Mike Egel from Spoke drives to our offices where we meet at 9pm to show the masterpiece and then we carefully package the display in a custom made carton so Mike can next drive to his client’s house 30+ miles away so they can take it with them for the long trip at 5am the next morning. Woo hoo to the Spoke team and the Swift Print staff who worked diligently to overcome every challenge without compromise to fulfill the client’s dream.

Food Trucks Without Wheels, Inviting Graphics and a Wonderful Mission. What’s Not to Like?
October 1, 2017